The potential for aircraft fatigue and structural failure is something that anyone in the aircraft industry is familiar with. Aircraft undergo rigorous testing before they can be considered safe and certified for flight to ensure that they can operate how they need to.

Still, since safety is at stake, metal fatigue and failure is something that must be considered with every maintenance inspection. Let’s take a look at what fatigue and metal failure are and how they can be prevented.

What Is Metal Fatigue in Aircraft?

Fatigue is a common occurrence among all metal airframes. Due to the repeated flight cycles and frequent use, the metal elements of planes become weakened over time, and they will eventually require attention and repair.

This weakness manifests in cracks, which are microscopic at first. With continued aircraft use over time, though, the cracks grow larger and eventually become visible. An aircraft begins to age after its first flight, and the effects of corrosion and fatigue occur almost immediately. Aging becomes an issue when the aircraft can no longer be effectively repaired or sustain the rigors of flight.

The signs of fatigue are more pronounced in aging aircraft and become more dangerous as the aircraft is continually exposed to atmospheric pressure. Because of this, after a certain number of flight cycles — a number calculated by manufacturers to ensure safety — an aircraft should be retired. This regulation is meant to prevent catastrophic failure.

Accumulating fatigue damage is an inevitable reality of flying metal airframes. Atmospheric pressure, G-loads, turbulence and other factors create the perfect environment for damaging stress. However, technicians and manufacturers can lengthen the longevity of an aircraft through routine maintenance and inspection.

What Is Fatigue Failure?

While aircraft fatigue is dangerous if not cared for, it doesn’t necessarily put a plane out of commission at first occurrence. However, aging — which leads to a combination of corrosion and fatigue — is the leading cause of cracks in the metal elements of an aircraft.

Structural failure occurs when aircraft fatigue is not detected early enough or is left untended. Since most fatigue cracks are invisible to the eye initially, it makes them particularly challenging to detect.

These cracks are what directly cause large-scale damage and danger. If an aircraft is continually utilized without proper fatigue inspection and maintenance, the microscopic-level damage can become visible cracks in the aircraft’s body and split wider after exposure to the flight environment. If left to widen or worsen, the results can be catastrophic. Parts of the aircraft may fracture and break off, or the aircraft’s skin might peel off during flight.

The danger lies in how quickly fatigue can progress to failure. While aircraft fatigue is a natural part of flight, both visible cracks and cracks invisible to the eye mean failure is a real possibility.

Why Does Aircraft Fatigue Occur?

Much like any metal vehicle, heavy use and wear weaken aircraft over long periods. Any time an aircraft is flown, it endures fatigue.

Pressure is the main cause of weakened metal components. Outside exposure from straight-and-level flight, turning, accelerating, decelerating and other maneuvers create repeated changes in the loading of the wings and other surfaces. Also, with the regular pressurization and depressurization of flying at high altitudes, the metal skin of an aircraft expands and contracts. Each cycle begins at the time of lift-off and ends after landing.

As metal is bent from its original shape and re-bent back, it becomes weaker at every hinge or site of expansion. This principle applies to all scenarios involving metal, even on the scale of bending a soda can tab back and forth. Eventually, the aluminum weakens and breaks off at the bend.

The same weakening and breaking eventually happens to aircraft skins and other metal components when they are exposed to various flight conditions.

These areas of high pressure are more prone to premature cracking and exhibiting early signs of fatigue. In the same right, they are often the areas recorded as the original sites of failure.

Large components moving at high speeds, such as engines, are also prone to cracking. Adding fast motion to already high stress levels creates an environment susceptible to damage, which is likely to progress to structural failure sooner than unmoving elements.

Aircraft undergo immense amounts of stress each time they fly, and they are not exempt from the effects of aging. Aging planes — those that have endured many miles of flight time — accumulate extensive wear and fatigue, creating a need for heavy monitoring and inspection.

While accurate methods of testing for aircraft fatigue are relatively new, there is a way to determine the amount of time an aircraft or particular metal has before fatigue causes severe damage.

To determine how many cycles an aircraft or type of metal can take, there has to be a measurable factor with which to make a comparison. This factor is called the Limit of Validity, or LOV.

The LOV is the time period — defined in hours, the number of flight cycles or both — an aircraft frame can withstand before it experiences structural failure or widespread fatigue damage (WFD). The manufacturer determines the LOV based on evidence gathered through various methods of fatigue testing, such as full-scale fatigue and component tests, less than full-scale tests, disassembly and refurbishment of an aged aircraft and fleet-proven statistics. Using the LOV helps to avoid aircraft fatigue at the microscopic level.

Measuring against the determined LOV is not only crucial for safety, but it is also an FAA regulation. Effective as of 2011, the FAA requires all aircraft manufacturers and operators to report the LOV levels of active aircraft on a set schedule, and they may not fly beyond the LOV unless an extended one is approved.

By maintaining this requirement, the FAA can ensure that documented aging aircraft are retired prior to experiencing any catastrophic failures.

In addition to LOV measurements, the FAA issues airworthiness directives (ADs). These require manufacturers to complete necessary work on any aircraft, engine, propeller or component exhibiting or having the potential to develop unsafe conditions.

All of these tests and regulations are in effect for the sake of safety. Many FAA requirements were created out of necessity, drawing inspiration from prior incidents of aircraft failures and crashes. They are routinely monitored by multiple aviation organizations to ensure all aircraft are operating within the set parameters.

How to Prevent Aircraft Fatigue Failure 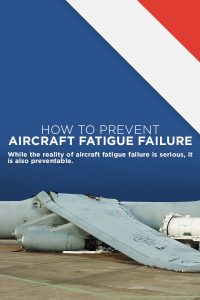 While the reality of aircraft fatigue failure is serious, it is also preventable.

One of the best ways to prevent aircraft fatigue failure is through regular inspections. Catching visual or otherwise detectable issues in advance can make the difference between a maintenance repair and a failure.

Aircraft fatigue is nearly impossible to detect without the use of a comparable LOV standard or ultrasonic equipment. However, it is crucial to ensure all aircraft are well maintained and given thorough inspection, as fatigue can rapidly turn into fatigue failure.

In accordance with FAA standards, all airline manufacturers and operators should regularly check that their aircraft is well within their determined LOV threshold.

The FAA requires both aircraft manufacturers and operators to take specific actions that can help prevent WFD, such as:

By upholding these requirements, aircraft have a better chance of remaining safe and in-use for longer periods of time.

Inspectors may also use non-destructive testing (NDT) methods to find points of fatigue, which are the least invasive methods.

NDT involves inspecting metal elements for inconsistencies or damage without destroying the element in question. This testing may include the use of ultrasound, X-ray scattering, X-ray absorption, electrical eddy currents, magnetic particles, liquid penetrants and optics.

Each test has its own specific purpose and method:

Another method of battling flight fatigue is by keeping an aircraft’s surface polished. Polished surfaces can fend off the effects of fatigue better than those left unpolished. It also buffs out any existing surface damage.

When metal elements are manufactured, micro-defects — such as pits, scratches and small gouges — can be left on their surfaces. These tiny inconsistencies can facilitate corrosion and worsen with the pressures of flight.

Surfaces that are ground and polished with care will be rid of these weaknesses, eliminating the risk of expanding and causing failure. However, this will not eliminate imperfections within the metal, so regular testing is still required.

Other than inspection, regular maintenance goes a long way. Even checking the wheels, brakes, hydraulic fluid and oil levels before each flight helps reduce friction and keeps moving metal elements from sustaining damage.

Because flight fatigue can quickly escalate once it starts to develop, regular maintenance is necessary. To correctly inspect and maintain aircraft, manufacturers and operators need to inspect the airplane’s skin and external components closely and thoroughly.

Maintain Your Aircraft With JETechnology Solutions

Your maintenance technicians need to be able to access all parts of the aircraft to ensure it remains safe to operate. However, in many cases, the height alone of aircraft can make physically working on them challenging. That means before technicians can begin their work, they need the correct kind of maintenance stand to reach the areas they need to on the aircraft.

At JETechnology, we offer custom designs for turnkey aircraft maintenance stands. Our highly-skilled engineers provide solutions for all unique aerospace and ground support challenges — military, commercial, business aviation and custom designs. We design, build and deliver your product from our Orlando, Florida facility, and we guarantee 100% in-house construction and completely U.S. manufactured solutions.

With ground support options for all types of aircraft and a partnership track record that includes Boeing, Airbus and all branches of the U.S. military, our team offers expert experience and knowledge of every industry’s needs.

Choose safety and convenience for your hangar — request a proposal for your custom design or contact us for more information.