When flying in the United States, you can rest assured of your safety in the air, regardless of what your fears tell you. Thousands of workers around the world put millions of hours of effort into making your flight safe and uneventful. From maintenance crews who keep the planes in top shape to the pilots who avoid storms and other obstacles, you have a team of people with you in the air. Discover the safety of boarding a plane in America today and relax on your next flight. You may even overcome your fear of flying after examining the data behind airline safety.

How Safe Is Commercial Flying?

If you have a fear of flying, like anywhere between 2.5% and 6.5% of the population does, know your anxiety has little evidence to support it. Planes do not crash regularly, and if an incident does occur, such as a sudden loss of altitude, deaths rarely happen. In fact, on an American commercial carrier, you would have to fly daily for 6,053 years before you encountered a life-ending incident.

Flying in America is a safe means of transportation that one billion U.S. passengers use annually. With so many people in the air, the chances of being in an aircraft that crashes are extremely low. In the vast majority of cases, accidents occur due to a chain of events rather than one single occurrence, and the situation is most often mitigated before anything catastrophic happens.

How Do You Survive a Plane Accident?

If you fear a fatal airplane accident, you should recognize that not all incidents cause deaths. Due to press coverage of deadly accidents, most people do not think of plane incidents as survivable. Rarely will news outlets report about a plane that lost altitude from the turbulence that resulted in no injuries.

Such stories are not as exciting as horrific catastrophes. This preference for disaster coverage disservices the public, who believe all flights complete uneventfully or everyone on board dies. However, according to an analysis from the National Transportation Safety Board (NTSB) of nearly 20 years of airline accident data, over 80% of aircraft occupants survived in various emergency situations. This further reflects the rarity of fatal accidents.

If you are in a plane that has an unexpected event occur, you can still survive by knowing some key safety points outlined to you by the flight attendants at the beginning of the flight. Throughout the trip, keep your seat belt buckled to avoid injury during unexpected turbulence and follow the instructions of the flight crew in case an incident occurs.

The FAA, however, has worked over recent years to require additional features for improved cabin safety. Seat cushions now must protect passengers from injury when subjected to 9G statically or 16G of dynamic force and have reduced flammability, increasing the time available for passengers to escape a fire on board the plane. Materials inside the aircraft and lining the cargo areas also must reduce the spread of flames. In the lavatories, planes must have smoke detectors and fire extinguishers. The design of the fuselage must promote faster movement to the over-wing exits for evacuations.

By making the interiors of planes safer and allowing passengers more time to leave after the aircraft reaches the ground, many once fatal accidents now are survivable.

Can Turbulence Crash a Plane?

Turbulence, or air currents that unexpectedly move the plane while in flight, is never an enjoyable experience. Though it’s more common near storms, it can happen even in clear weather. If the movement bothers you, book a seat over the wing to reduce the feeling of motion.

There has also only been one instance where turbulence caused an airplane to crash. That one incident happened in 1966 when a flight encountered severe turbulence near Mount Fuji that exceeded the plane’s design capabilities. The excessive forces exerted on the plane caused it to break apart and crash. Because of that accident, however, airliners and pilots have learned a lot about preventing a repeat of the incident while making passengers more comfortable.

Today’s planes and pilots have more preparation for such occurrences. In fact, most pilots do not think of turbulence as a safety issue, rather a nuisance. Planes can withstand high levels of positive and negative Gs, as evidenced by the 16G seats required by the FAA.

Better built planes can stand up to the toughest turbulence, and pilots have extensive training to properly maneuver the plane around areas of rough air currents. When flying through turbulence, pilots know to rise or descend in altitude to avoid the roughest air spots and to slow to a low enough speed to pass through the turbulence with as little damage to the plane as possible.

When it comes to turbulence and your flying safety, you don’t need to worry. Take it from pilots who spend thousands of hours in the air — turbulence is not only a non-issue. It’s a normal part of a flight.

How Safe Is Flying – Statistics

Flight safety statistics do not back up the fears many people have about being in the air. You probably don’t fear dogs, falls or getting hit by a car while walking across the street, but all these cause more deaths each year than airplanes.

According to the National Safety Council, your odds of being in a fatal plane crash are one in 188,364. This data puts other causes of death such as dog attacks, cataclysmic storms, choking on food, falling, pedestrian accident, motor vehicle crash, opioid overdose and cancer as all more likely than a plane accident. The only deaths looked at by the NSC that ranked less likely were lightning and being a train passenger. 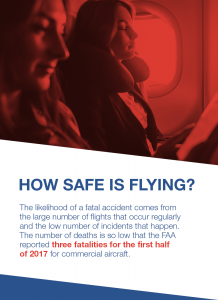 The likelihood of a fatal accident comes from the large number of flights that occur regularly and the low number of incidents that happen. In the United States, 44,000 flights take off each day, which adds up to 16,100,000 flights annually. The number of deaths is so low that the FAA reported three fatalities for the first half of 2017 for commercial aircraft.

While the numbers are low, the FAA thinks they can be even lower. Through a series of initiatives to reduce fatal flying accidents, the FAA has a goal of reducing the number of deaths per 100,000 flyers by 24%. The goal for 2017 was no more than 6.4, with 2018 boasting a target of 6.2 deaths per 100,000 people. The year 2017 closed with six fatal accidents in the United States and 2018 with seven.

Flights have gotten safer in recent years on a global scale. The year 2018 was the third lowest in the number of accidents with fatalities and the ninth safest in terms of deaths. That year, there were 15 accidents, three of which were cargo planes. Worldwide, only 556 people died from these incidents. The previous year had even more impressive numbers, only 10 events and 44 deaths.

Hopefully, these numbers help to allay your fears of flying in the U.S., but you may also want to know why flying is safe. Airlines and the millions of people who support them contribute to modern flying safety data.

Why Is Flying Safe?

Flying in the United States is so safe because airlines have a core cultural expectation of achieving high safety standards. The top airlines have always exceeded the minimum expectations set on them for maintenance and training. Such exceptional attention to safety has made accidents such as the 2017 Southwest Airline’s fatality rare occurrences. The incident marked the industry’s first death in nine years on an American commercial airline.

Airlines have redundant systems on planes to keep you in the air and safe. For example, the hydraulic system has a backup, and the reserve has another one behind it. The same situation holds for the navigation system. Regular maintenance of all these components and highly trained pilots required for American carriers are ways that American airline companies keep you safe.

Other parts of the plane also improve safety. Since just 2002 alone, the airlines have flown millions of flights. Such experience leads to better-designed aircraft that focus on safety rather than just aesthetic design. Technological advances warn pilots of coming storms, terrain or other aircraft. Additionally, pilots now need more technological savvy to operate electronic devices rather than brute strength to move mechanical controls.

These experts work to prevent collisions between planes on the ground and in the air while directing aircraft to their destinations in the most efficient manner.

Pilots, too, help keep your flight safe. Today’s commercial pilots typically must have at least 1,500 hours of flight time before they are even considered for hire. With simulators taking over much of those flight hours, new pilots have even more experience with rare emergencies than their predecessors did. Today’s pilots only have to turn on a challenging simulator scenario to test their mettle in situations that their counterparts from decades ago would never have seen unless in an actual emergency.

Pilots also must have the ability to focus exclusively on the flight. Today, airlines hire pilots with the ability to compartmentalize their personal lives from their professional work. Others look for extensive experience, excellent communication skills and quality leadership abilities.

The commercial flying industry makes a lot of money. In 2018, the industry had an economic impact of $2.7 trillion globally. Keeping passengers and planes safe is in the industry’s best interests. Passengers choose reliable airlines for their trips, and one accident can affect the number of people selecting that carrier. While the airlines want to protect their employees, the flight crew, they also want to keep you safe for your protection and their bottom line.

What Is the Most Dangerous Part of Flying?

Many people concerned about the safety of flying worry about the most dangerous time of the flight. The good news is that most of the trip, the cruising portion, has a lower chance of incidents happening compared to the beginning and end.

The most dangerous parts of flying, the final approach and landing phase, accounted for 49% of fatal accidents between 2008 and 2017. The other significant time during the flight for fatalities is take off and the initial climb. Combined, these portions of the trip make up 14% of fatal accidents.

Since these are the most dangerous portions of the trip, do not nap during takeoff or landing. Before takeoff, remain alert to hear the safety information from the flight attendant. As with other precautions you take on a plane, it could help you survive an accident if such a rare incident occurs.

So, is flying safe? This transportation method is more reliable than driving thanks to the workers who contribute to keeping planes in top shape and safe. We at JETechnology Solutions are part of this solution by creating the equipment aircraft maintenance crews need to finish their jobs.

If you work with flight maintenance crews who service military or commercial aircraft, you know how important reaching the plane is for their jobs. At JETechnology Solutions, we create custom maintenance stands and more for work crews to help keep aircraft flying safely. For more information about our products or to find out how we can customize a solution for you, contact us.